This document outlines the firewall ports required to be opened and on which server depending on the services running (Windows, SharePoint, Database Server) for a mutli-tiered SharePoint Server farm.

Of course, this is only one scenario and it all depends on SharePoint farm and network configuration you have and whether you configured behind gateways, firewalls etc. 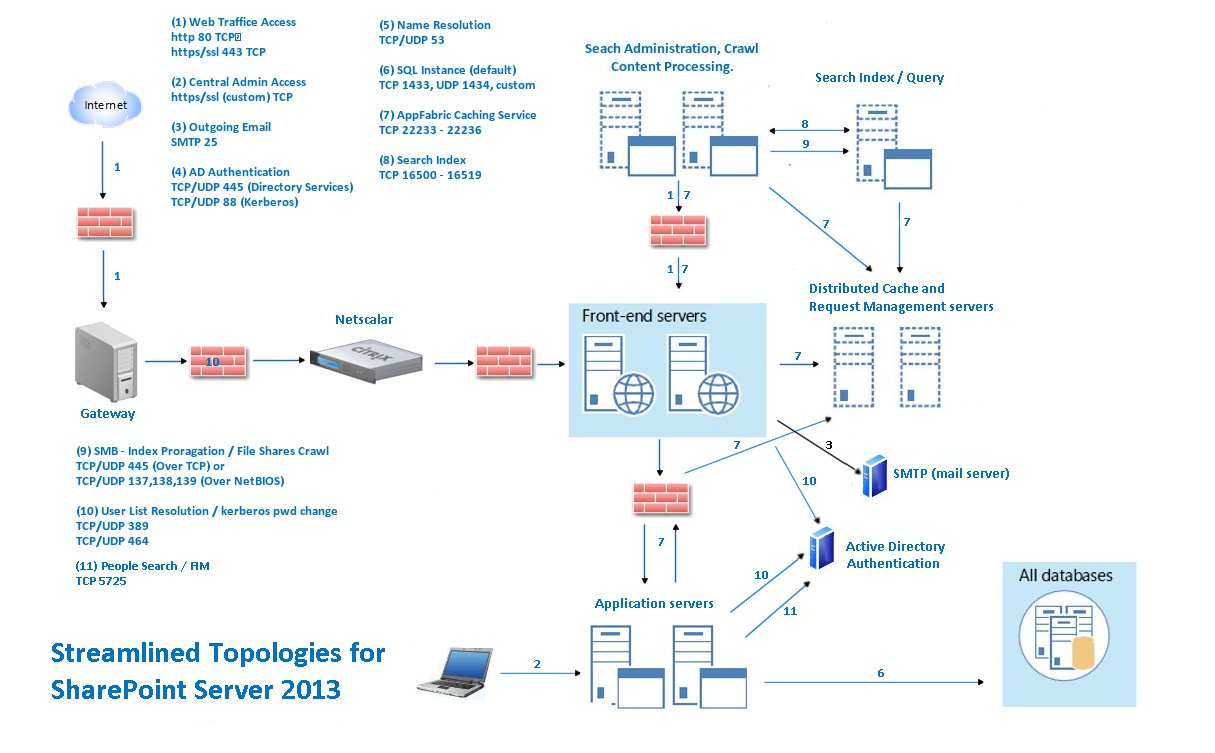 Web Front End Server
When a range is specified all ports between the range must be opened.

Distributed Cache
When a range is specified all ports between the range must be opened.

Application Server
When a range is specified all ports between the range must be opened.

Search Index Query Server
When a range is specified all ports between the range must be opened.

Search Administration & Crawl Content Processing
When a range is specified all ports between the range must be opened.

Routes to the Database server
Database communication:
On the Query Server, the query processor (also known as the Search Query and Settings Service) communicates with the following two databases in SQL Server:

Routes to the Webserver
Search crawling —The crawl component on the Crawl Server processes crawls of content resources. Depending on how authentication is configured, SharePoint sites might be extended with an additional zone or Internet Information Services (IIS) site to ensure that the index component can access content; this configuration can result in custom ports.
• TCP 80
• TCP 443 (SSL)
• Custom ports

The following table lists the port requirements for inbound connections from each server role to an Active Directory Domain Services domain controller.

LDAP/LDAPS ports are required for server roles based on the following conditions:

The following table lists the port requirements for inbound connections from each server role to a Domain Name System (DNS) server. In many extranet environments, one server computer hosts both the Active Directory Domain Services domain controller and the DNS server.

The following table lists the port requirements for inbound connections from each server role to a server running SQL Server. Most database connections are on TCP port 1433 by default for the default instance, but this is customizable. (Because TCP port 1433 is a well-known port for accessing a SQL Server, you could configure your server running SQL Server to listen on a different port and block port 1433.) For named instances, you can choose a random port.

E-mail integration requires the use of the Simple Mail Transport Protocol (SMTP) service using TCP port 25 on at least one of the front-end Web servers in the server farm. The SMTP service is required for incoming e-mail (inbound connections). For outgoing e-mail, you can either use the SMTP service or route outgoing e-mail through a dedicated e-mail server in your organization, such as a computer running Microsoft Exchange Server.